Today, 1st March, is Self Harm Awareness Day. This awareness day is close to my heart as self harm is something that’s been part of my life for a long time. There is a lot that people assume about people who self harm and some of these misconceptions can be broken down on this awareness day. This year I decided to ask some friends, who don’t self harm, for their questions and I’d answer them. I’ve also added in a couple of frequently asked questions that hopefully will break down some of the misconceptions.

What are the best/worst things to say to someone who has self harmed?

The best things to say to someone who self harms is that you love them no matter what and that if they want to talk that you are there to listen. The worst thing to do is get angry and just tell them to stop. This will make them hide what they are doing more. For more things that are unhelpful you can see my blog post here.

How does self harm make someone feel?

This is a complex question and will probably be different for everyone who self harms. Quite often it can feel like a release at the point of harming. This however can develop into a feeling of guilt about succumbing to the urges. There can be many other feelings that come from self harming; anger at themselves, disappointment, and sadness. It often feels very confusing with so many emotions.

One emotion that doesn’t often get mentioned is joy and pride. This can happen when you self harm as you might be pleased with what you’ve done to begin with. This emotion doesn’t often last and it can lead to more self loathing as you know you shouldn’t feel this way about hurting yourself.

What triggers someone to self harm?

There are many things that can trigger someone. Triggers are very individual; what triggers one person may not trigger another, although a few may be pretty universal. Some major triggers can be arguments, images of self harm, stressful situations and past traumas. Sometimes though there can be nothing obvious as a trigger. It can just feel like a build up of emotions that you just need to get out.

What should I do if I suspect someone is self harming?

If you think someone is self harming it can be tricky to know what to say or do. It can however be as simple as saying to them “how are you?” and making them aware you’re there for them. Also asking the question “are you self harming?” is a good idea. It will not make the person start self harming but may help them open up and get the help they need.

Who usually self harms?

There is no usual person that self harms. There is a big misconception that it is something only young people do but that’s not true. I know of people who have been much older before they have self harmed for the first time. It can be anyone from any background that self harms.

What are signs someone is self harming?

There may not be any signs that someone is self harming. Contrary to popular belief most people who self harm do not do it for attention. Some signs that may be seen are covering certain areas of the body (e.g. Covering arms or legs in hot weather), unexplained injuries, being secretive or mood swings.

Thank you to those who gave me the questions, I hope I’ve answered them well enough. If you have any further questions about self harm feel free to ask in the comments or on Twitter, Facebook or Instagram. 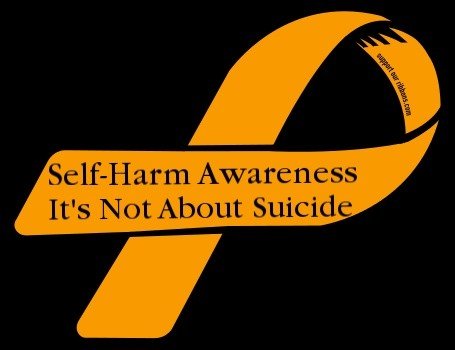 This is a personal piece. Please be trigger aware when reading.

Things for me, just lately, have not been going well and this has led me to revisit an old coping mechanism; self harm. It has become a big part of my life again and something I have come to rely on to help me get through each day. It has also reminded me why I despise it so much as well. This post is about my current relationship with self harm.

Self harm, for me, is a bad coping mechanism. It keeps me alive at times but not living a life. It has dragged me back into an existence that I do not like, yet I feel powerless at the moment to do anything about it. It has become the centre of my thinking again as I find myself counting down to the next time I can hurt myself as well as visualising how I can do it. This is far from helpful. So why am I holding onto it?

The answer to the above question is partly answered here. It is an addiction. I am addicted to hurting myself for the small relief I get from it for a few minutes after I have hurt myself. I am addicted to the feeling of endorphins being released after I have caused myself pain. In this way self harming is very much like being an alcoholic or a drug addict. I was ‘clean’ for so long but when things got difficult I found myself falling back into my addicted state.

As with any addiction there is a cycle to it; hurt self to feel better, guilt sets in, feel worse, repeat. And this is a cycle I have known for more than half my life. No wonder I found myself falling back into it. As I have said before it is very much like being an alcoholic. The temptation is always there. I had resisted it for over a year but a set back has taken place and I feel I am back to square one. But am I?

The honest answer to this question is I don’t know. At the moment it feels like the self harm is here to stay but I also have the knowledge that I have managed without it for a considerable length of time so there is hope I could do this again and maybe for longer. We will have to see. Hopefully with support I will get back to a place where I do not need self harm as a coping mechanism. I will keep you posted on my progress.